In 2003/2004, during my commitment at HPLabs, Palo Alto, California, and more recently in 2011/2012, upon request of on of my customers, I worked for the design of video surveillance systems based on embedded architectures. In 2003 my work was based on a network of distributed nodes aimed at video surveillance basic tasks; each node was equipped with

and it was performing object tracking through background differencing. 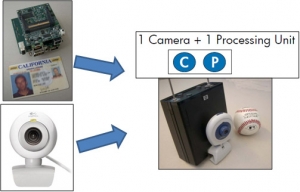 A higher-level node was putting together the data coming from single camera object tracking and was performing object positioning on the 2D map of the monitored environment. This system was connected to an access control system based on RFID (HF/UHF), and then I have personally added the biometric identification through fingerprinting: the fingerprint was read and a template was matched real-time with a fingerprint template stored in the RD/WR memory of the RFID.

More recently I have been commissioned to study DaVinci and Omap architectures, from Texas Instruments. These architectures have the advantage of offering generic purpose programming platform via ARM and very powerful processing through DSPs specifically devised for multimedia streaming and video surveillance. This project is still in progress and I will not publish here more details. You can contact me and/or have a look to T.I. promo: